Spice Is Nice But Sugar is Sweeter 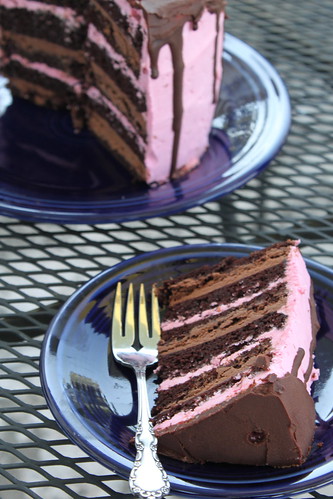 So I celebrated a big one a few weeks ago.   Yep, a whole year has passed.  Since my brother and I were born on the same day, our birthdays were always a big deal.  It all started when I was 6, and my brother was turning 1.  Tell a six year old that they have to share their birthday after 5 years of flying solo, and well, it could’ve been a little rough.  Instead my parents went over the top and had an all out celebration with a tiered cake, our whole family,  and a clown who doubled as a magician.  I still cheered when the clown told me he was going to make my brother disappear, but overall, I LOVED sharing a birthday.

This year was no different.  It’s been pretty great being back in Ohio and being able to once again share birthdays with my favorite brother. I insisted on making the cake, because it’s the one time of the year I don’t feel bad about going all out with an over the top birthday cake.  Six layers was obviously a necessity, but because I didn’t want to be eating leftover cake for weeks, I thought 6 inches was perfect.  The only problem – I didn’t have any six inch cake pans.  Thankfully whole foods came to my rescue.  I noticed they sold 6-inch cakes and jokingly asked the baker if she had any pans for sale.  Well it turns out they bake all their cakes in disposable paper rounds – and she gave me 3 for a buck, steal! 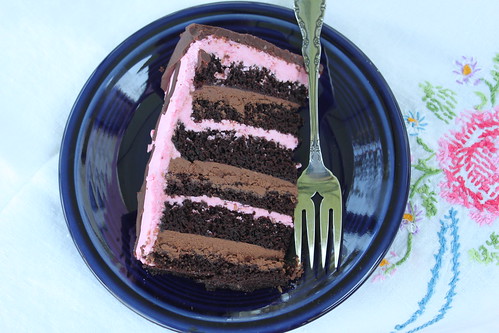 The initial recipe called only for the raspberry filling, which does make a beautiful contrasting interior, but I really wanted more chocolate, so I alternated a chocolate ganache frosting with the raspberry butter cream.  It was  not much more work because the ganache is just 2 ingredients, whipped to a fluffy consistency.  But I will say the cake on it’s own is a moist, rich, dense chocolate cake, and could easily stand as the only chocolate in the cake if you want to double the strawberry buttercream instead. The whole thing is then topped with a rich chocolate ganache that drips down the sides and makes for a wonderful presentation.   If your looking for some other wonderful birthday cakes, here’s a few I’ve made: 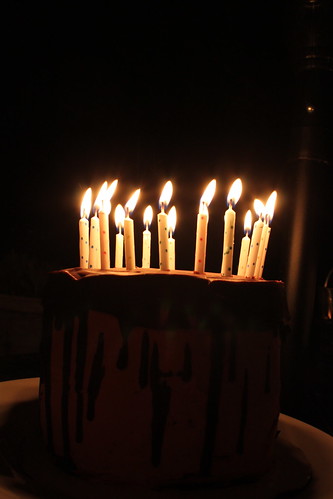 For the Raspberry Swiss Meringue Buttercream:

For the Whipped Chocolate Ganache Filling:

For the Chocolate Glaze:

For the Cake:
For the Raspberry Swiss Meringue Buttercream:

For the Whipped Chocolate Ganache.

For the Glaze:
Assembly of the Six-Layer Dark Chocolate & Strawberry Buttercream Cake